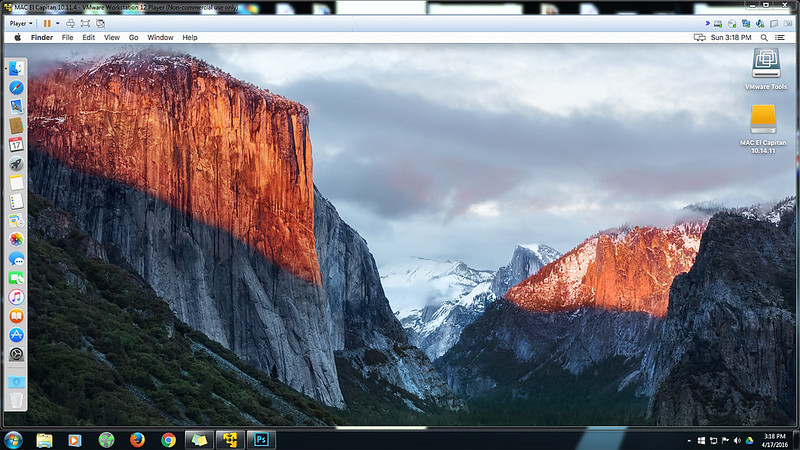 Over the last several weeks I have been asked to resolve some Mac OX issues, fortunately they weren’t serious issues, mostly installation issues. Since the Mac OS kernel is a variant of BSD and Linux I was able to resolve their issues at the terminal.

I realized in order for me to make proper diagnosis on more complex problems I would need to know the OS as well as I do with Windows and Linux.

I first tried to install El Capitan using Oracles virtual box, I found that I couldn’t install it directly, so I attempted to install Yosemite, only to realize that with Virtualbox it was going to be very time consuming because virtual box doesn’t really support Mac OS. The problem has to do with the Intel chipset and how the Mac OS interacts with the chipset.

I did a little additional research and found that VMWare could be easily set up to run Mac OS, but you had to find, not an iso, or dmz of the OS but a VMWare version. I found another copy of Yosemite which was pre setup for VMWare, the other thing an unblocker was required to unblock the Mac OS features of VMWare.

I lucked out on my first search I found both the VMWare version of Yosemite and the unblocker. I was able to install Yosemite without any problems. After I installed it a powered on Yosemite, a notification came up the El Capitan was available for free to upgrade Yosemite. Before proceeding I made sure that I had the system requirements that El Capitan needs in order to function.

Have the all of the system requirements that El Capitan needed I proceed with the update, the upgrade went through without a hitch. A Eureka moment, El Capitan running on a Windows 7 Machine courtesy of VMWare.

If there are any request for a tutorial on installing El Capitan on a windows machine I will gladly produce a tutorial showing you how to do it and what caveats to look for.